A JOURNEY THROUGH THE TEN CRUCIAL DAYS OF THE AMERICAN REVOLUTION December 27, 2022 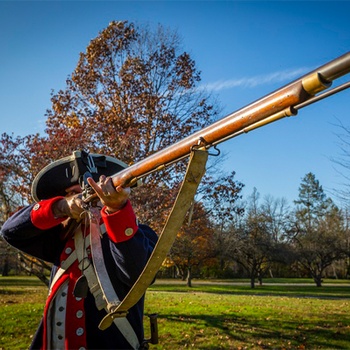 After humiliating defeats during the late summer of 1776 in New York, General George Washington and the Continental Army made their way through New Jersey to find lodgings for the coming winter months. Low on morale, supplies, and winter clothing, General Washington and his troops settled in Pennsylvania along the banks of the Delaware River in December 1776 with little optimism for future fighting and the end of many of his enlisted soldiers’ contracts in sight. Little did they know that their actions between December 25, 1776 and January 3, 1777 would change the course of the American Revolution and American history. Follow the Continental Army through those Ten Crucial Days by visiting some of the crucial sites depicting their fight for victory.

The Ten Crucial Days begin on Christmas 1776 with one of the most well-known scenes of the American Revolution. Under the cover of darkness, General Washington led his troops by boat across the frigid Delaware River. The location of the crossing was crucial because General Washington needed access to ferry boats to transport larger supplies, such as horses, wagons, and artillery, across the Delaware River. When visiting Washington Crossing State Park, you will see the Johnson Ferry House where the ferry operators and committed Patriots, Johnson and Slack, assisted the Continental Army in getting their larger cargo across the river.

After a several mile walk, the Continental Army arrived in Trenton on December 26, 1776. Before entering the city, Washington split his army into two columns in order to lead a synchronized attack on two Hessian outposts about a mile outside Trenton. Washington’s surprise attack was successful, and the Continental Army forced the Hessian units to retreat into town.

Less than an hour after the first cannon shot was fired on December 26, 1776, the first Battle of Trenton was over. The Hessians had suffered significant casualties while the Continental Army had a handful of wounded soldiers. Originally built to house British troops during the French and Indian Wars, the Old Barracks would have served as a lodging house for the Hessian troops in Trenton. After the Continental Army’s victory, the Old Barracks would serve many purposes for the Patriot cause during the Revolutionary War including as a military hospital.

After this historic victory, Washington was able to convince half his soldiers to extend their enlistments for another six weeks. Now aware of the Hessian defeat, British authorities in New York hastily assembled a large army in Princeton, ten miles north of Trenton. In anticipation, Washington established defensive positions in Trenton and prepared for future fighting.

On January 2, 1777, eight thousand British troops arrived in Trenton. The Battle of Assunpink Creek occurred several blocks down the street from the Old Barracks in what is known today as Mill Hill Park. While the British made several attempts to advance across Assunpink Creek, they ultimately failed and suspended fighting as darkness fell. With no intention of re-engaging the British in Trenton, Washington began moving his troops out of the city under the cover of darkness towards Princeton.

Once again, General Washington split his troops sending most of them on an unguarded road to Princeton that cut through several farms, while the other portion stayed on the main road so they could attack Princeton from the opposite direction. The Battle of Princeton would be General Washington’s final push to re-establish control in New Jersey.

Originally, Washington had planned to engage British troops in the town of Princeton itself. Around daybreak on January 3, 1777, however, the Continental Army that was making its way towards Princeton on the farm road intersected with British troops marching towards Trenton under the orders of General Lord Charles Cornwallis. The two armies engaged in a bloody battle for less than an hour after the first shot was fired. Overwhelmed by a three-sided attack from the Continental Army, the British began retreating to Princeton with the Continental Army in hot pursuit after them. This Battle gave Washington his first victory against the British on the field.

Although the British attempted to fortify Nassau Hall on the campus of Princeton University, they ultimately failed, and Washington’s troops were able to take control of the town. Washington could not revel in his victory for long because General Cornwallis would have sent his troops on a quick march back to Princeton upon hearing the news of the British defeat. Regardless, this marked a critical turning point in the American Revolution for the Continental Army and allowed General Washington to establish a defensive position between the American capital in Philadelphia and the British stronghold in New York.

The Princeton Battle Monument is located at what would have been the edge of town in 1777. It was designed by prominent Beaux Arts sculptor, Frederick MacMonnies, and assisted by architectural designer, Thomas Hastings. It was completed in 1922 and serves as a commemorative monument to the American victory at the Battle of Princeton.

Want to learn more about the Ten Crucial Days? Check out these resources!