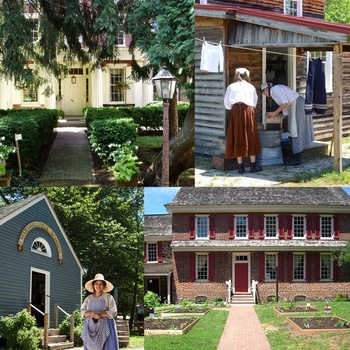 South Jersey is the southernmost portion of New Jersey and is considered part of the Philadelphia Metropolitan Area. It is comprised of seven counties located between the Lower Delaware River and the Atlantic Ocean – Atlantic, Burlington, Camden, Cape May, Cumberland, Gloucester, and Salem. The region exhibits both geographical and cultural differences from the northern part of the state. South Jersey features expansive woodland and farmland and some stark linguistic differences when compared to the bustling northeast: hoagie vs. sub, jimmies vs. sprinkles, pork roll vs. taylor ham, just to name a few. Folks from south Jersey root for the Eagles instead of the Giants, make day trips to Philly rather than New York City, and vacation at different shores (or beaches). South Jersey is also home to one of the oldest pieces of folklore, the Pine Barrens’ own Jersey Devil, which is described as a flying biped with hooves that terrorizes anyone who encounters it. Folklore and cultural differences aside, South Jersey is the home of brave and innovative women who helped shape New Jersey and the country, including Revolutionary War heroines, industrialists and agricultural pioneers.

Located in Burlington County is Historic Smithville Park, a former industrial plant that employed hundreds of workers in its shops and yards from the 1860s to the 1920s. Smithville, formerly known as Shreveville, was purchased in 1865 by Massachusetts businessman and inventor Hezekiah Bradley Smith and his wife Agnes Gilkerson Smith. As a young woman, Agnes worked in the industrial mills in Lowell, Massachusetts and later studied medicine at Penn Medical University in Philadelphia. Agnes also served as the editor of The New Jersey Mechanic, a national publication that incorporated the mechanic’s trade, travel, literature, philosophy, and medicine (5). At Smithville, Agnes and her husband created a model workers’ village which incorporated principles developed in the early labor movements in Europe.

In October 1777 in Gloucester County, British ships occupied the Delaware River after successfully capturing Philadelphia. Continental forces in the area, however, held onto two forts in the area in an effort to keep British ships from acquiring supplies in Philadelphia. Local residents were forced to leave their homes when a battle ensued. Ann Cooper Whitall refused to leave her home and instead continued working at her spinning wheel as the battle raged around her. It has been said that when a cannonball burst into the room where she was working, she picked up her spinning wheel and moved to the basement. Later that day when the Continental Army secured a victory, Ann cared for wounded and dying soldiers (31). The Whitall House continued to serve as a field hospital for days after the battle, now known as the Battle of Red Bank.