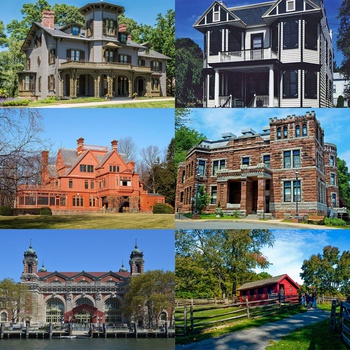 Northern New Jersey may be best known for its proximity to New York, but it is also home to some women’s history attractions that are open for you to explore!

Northern Jersey is comprised of eight counties – Bergen, Union, Essex, Hudson, Morris, Passaic, Sussex, and Warren. Northern New Jersey is home to Taylor Ham (yes, it’s Taylor Ham not pork roll), the most shopping malls in one area, and the George Washington Bridge, one of the world’s busiest motor bridges connecting Fort Lee to Upper Manhattan. New Jersey’s past is rich with famous women who helped shape the state’s past and present. Take a look at some of the Journey Through Jersey women’s history sites in Passaic, Essex, Hudson, and Morris counties!

Passaic County offers a wide array of cultural, historic, and natural attractions including the Botto House and Lambert Castle. The Botto House, located in Haledon, was the home of Italian immigrant silk worker Maria Botto. Her home became a popular meeting place for Sunday outings by fellow silk workers during the 1913 Paterson Silk Strike. The 1913 Paterson Silk Strike was a work stoppage involving silk mill workers in Paterson demanding the establishment of an eight-hour work day and improved working conditions[1]. During the strike, Maria hosted visiting Industrial Workers of the World leaders Elizabeth Gurley Flynn, Upton Sinclair, and others who addressed thousands of laborers from her home’s second floor balcony. The Industrial Workers of the World was established in 1905 in Chicago, Illinois as a member-run union for all workers striving for better work conditions and economic democracy[2]. Lambert Castle in Paterson is home to donated possessions from prominent philanthropist, community leader, and anti-suffragist Jennie Tuttle Hobart, wife of Vice President Garret A. Hobart who served under President William McKinley. Anti-suffragists sought to keep the status quo of a male-headed family which opposed giving women equal suffrage rights.

In addition to the northern New Jersey’s generous industrial contributions, the League of Women Voters of New Jersey was founded in Newark, Essex County, in April 1920[1]. The League was established as a non-partisan organization in order to educate women for their new political role in helping to create a more perfect democracy. Essex County, is also the location of the Thomas Edison National Historical Park. Thomas Edison’s residence, Glenmont, situated in nearby Llewellyn Park became the domain of Mina Miller Edison. Edison’s [MOU1] second wife, Mina, preferred the title “home executive” and ran the estate like a small business. Mina was in charge of all aspects of care and maintenance including all decisions concerning the staff and hosted many visiting dignitaries.

Did you know Ellis Island is actually owned by New Jersey and is considered part of Hudson County? Ellis Island is well known as the gateway to America for newly arriving immigrants. The women who staffed Ellis Island also played a significant role. Women worked in various immigrant related facilities on the island as physicians, translators, nurses, matrons, kitchen workers, laundry workers, and most significantly, social workers. These women helped make the lives of the immigrants at Ellis Island easier while also helping them transition to life in a new country.

Morris County, home to America’s first National Historic Landmark is also the location of two notable Journey Through Jersey women’s history sites. Acorn Hall, an 1853 Italianate Villa style house survived thanks to Mary Bolles Crane, Julia Crane Corning, Alice Castleman Hone, and Mary Crane Hone. The Crane-Hone women were committed to preserving the interior and exterior of the building, further demonstrating their commitment by donating the property to the Morris County Historical Society in 1971. Located down the road is Fosterfields Living Historical Farm. The working historic farm was given to the Morris County Park Commission by former owner Caroline Foster, who lived on the farm for nearly 99 of her 102 years of life. The site reflects Caroline’s life as a wealthy woman groomed in the social graces of the Victorian era as well as being an independent fisherwoman, hiker, carpenter, and horsewoman who ran a farm.