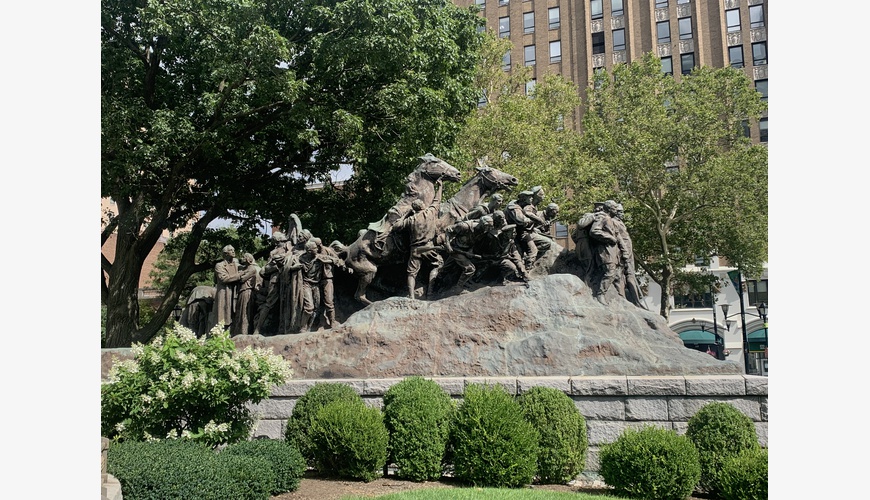 
Military Park is a triangular, six-acre park bound by Broad Street, Park Place, and Rector Street. Designed by Robert Treat as a training ground and visible on maps dating back to 1667, it served as a training ground during the French and Indian war and a campground for General George Washington and his troops during the Revolutionary War. The park was used again to recruit soldiers during the Civil War and World War I in addition to being the location of the Red Cross and Liberty Loans campaigns.

The park includes an Episcopal church, Trinity and St. Philip’s Cathedral, originally constructed in the mid-eighteenth century. During the Revolutionary War, the church was used as a field hospital. The park is also the location of many monuments and important pieces of public art. In 1926, the Wars of America monument by Gutzon Borglum, the sculptor best known for his work on Mount Rushmore, was unveiled and consists of 42 bronze figures on a raised platform with representations of soldiers and civilians from the Revolutionary War, Civil War, Spanish-American War, and World War I. There are several other statues scattered throughout the park including Major General Philip Kearny, Generals Ulysses S. Grant, William T. Sherman, and George B. McClellan, Fredrick T. Frelinghuysen, a John F. Kennedy bust, a cannon captured from Morro Castle during the Spanish-American War, and two howitzers that had been used in the Civil War and taken on Commodore Perry’s flagship during his expedition to Japan.

Today the park is maintained by the Military Park Partnership which offers free daily programming and amenities, including movies, yoga, music, children’s activities, and chess and board games.