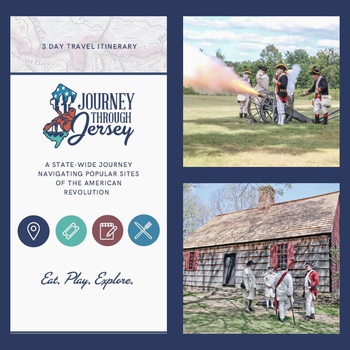 New Jersey is full of adventure. From the vast forests of the Pinelands to the bustling suburbs across from New York City, New Jersey's culture reflects its geography and the historic moments that have unfolded because of it. One historic period remains well known to not only New Jersey, but all of America-- the era of the Revolutionary War.

New Jersey is known as the Crossroads of the American Revolution. More major battles were fought here, and General George Washington and his Continental army spent more time in New Jersey, than any other place. Visitors are welcome to relive and retrace the major sites that preserve the importance of the monumental battles that changed the course of the war. Covering sites in South, Central, and Northern New Jersey, the itinerary gives insight to Princeton Battlefield, Morristown National Historical Park, Fort Lee Historic Park, and other nearby sites and restaurants that capture New Jersey’s rich history.

To experience New Jersey is to journey through it. Grab your friends, your family, and embark on a three-day campaign to eat, play, and explore New Jersey's Revolutionary roots!