ELLIS ISLAND: THE GATEWAY TO AMERICA IN NEW JERSEY July 15, 2021 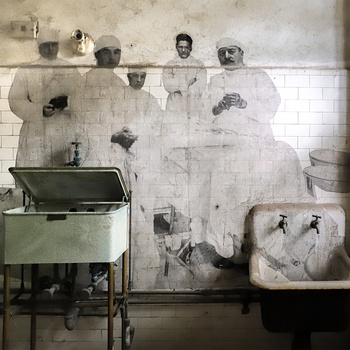 It may be best known for its proximity to New York City and the Statue of Liberty, but Ellis Island offers a unique visitor experience to explore the history of the millions of newly arrived sick or infirm immigrants who passed through the station.

Operated today by the National Park Service, Ellis Island first opened in 1892 as a federal immigration station, a purpose it served for more than 60 years. Known as the “Island of Hope, Island of Tears,” millions of newly arrived immigrants who had traveled in second or third class passed through the station during that time. Upon arrival on Ellis Island, they were subjected to a health inspection and required to meet certain legal standards to gain entry.

At the time, Ellis Island was the location of the largest public health hospital. Immigrants who arrived sick or infirm were treated and detained at the hospital. The hospital buildings and their histories represent the often forgotten portion of Ellis Island’s national story through the lens of medicine and public health. Restored buildings on the south side of the island include the Ferry Building (the point of departure once immigrants had been processed) and the Recreational Pavilion (which, at the time, was financed using New Deal funding). After physicians conducted ‘six second physicals’, most immigrants were cross examined, soon to be free Americans. Only two percent of immigrants that arrived on Ellis Island were excluded from entry. Following the Immigration period, Ellis Island was used as a holding facility for displaced persons during World War I. During World War II, 60,000 United States Coast Guardsmen were trained at the facility. In 1954, Ellis Island was declared surplus property and remained vacant for 60 years. Today, visitors can take a 90-minute guided hard-hat tour of the hospital complex to see the patients’ dormitories, recreational areas, original pharmacy, administrative building, laundry room, surgical room, and more!

Part of Statue of Liberty National Monument NJ/NY, Ellis Island is home to the National Museum of Immigration, located in the main building of the former immigration station complex. It is estimated that close to forty percent of all current U.S. citizens can trace at least one of their ancestors to Ellis Island. Visitors can view the vaulting Registry Hall, where immigrants were processed before entering the country and tour the National Museum of Immigration to learn more about the people who came to America in search of the American Dream. Exhibits throughout the museum are thoughtfully curated to resonate with all visitors-- photographs of young families in New York or abroad, cover the walls of major rooms. Collections of international currency, letters, and pencils used to take down the names of America’s newest residents are located throughout the museum.