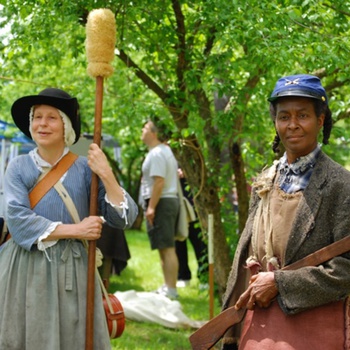 During the American Revolution, women performed central tasks that helped secure America’s independence. Women organized fundraisers, helped supply the troops with needed materials, worked in military camps, and tended to wounded soldiers. Women often followed their husbands in the Continental Army tending to domestic chores but were sometimes cast into battle. Monmouth Battlefield State Park in Manalapan is the site of the largest single day battle of the war and interprets the story of Mary Ludwig Hays, better known as Molly Pitcher, who famously replaced her husband on the cannon and fired upon the British (NJDEP 2005, 75). The roles of women in military affairs are also interpreted at the Gateway National Recreation Area in Sandy Hook. In the summer of 1943, Fort Hancock began housing women soldiers when the United States Army became the first of the military branches to enlist women in the midst of World War II. The Women’s Army Corps was originally an Auxiliary designed to help free men from combat duty, but shortly after arriving at Fort Hancock, the Auxiliary status was dropped and women received the same pay, rank, and privileges as male soldiers (16).

Women’s organizations were also instrumental in the American historic preservation movement and many central New Jersey historic sites celebrate these activists and their stories. The Old Barracks Museum in Trenton is the only remaining barracks structure in New Jersey and one of the finest examples of colonial barracks in the country. It is also one of the earliest sites in New Jersey to be preserved by women! Beulah A. Oliphant organized the local Daughters of the American Revolution (DAR) to raise funds to purchase and preserve the site in 1899 (114). In Middletown, Marlpit Hall was built in 1756 by Edward Taylor, a prosperous landowner and merchant who was active in colonial government and a loyalist. In the early 20th century the house was threatened by demolition. Mary Holmes Taylor, the last of the Taylor family members, fought a successful battle to save the house. The house was restored in 1935 by Margaret Riker Haskell and local antique dealer, Edna Netter (11). In 1783, the Continental Congress rented the Rockingham Historic Site, located in Kingston, from widow Margaret Berrien for use by General George Washington. More than 100 years later, Josephine Swann and Kate McFarlane along with a prestigious concerned citizens group, came together to save the house from demolition. Swann purchased the farmstead for $1,200 and it became the new location for the Washington Headquarters Association (117).

Several central New Jersey historic sites also interpret the stories of women as workers and leaders. Located in Middletown, the Sandy Hook Lighthouse was built in 1764 and is considered the oldest working lighthouse in the United States! In 1864, recently widowed Sarah Patterson Johnson was appointed Assistant Keeper of the lighthouse, working with her brother Charles who served as Head Keeper. Women often assumed the responsibility of Assistant Keepers when their husbands passed away (15). To the southwest, four generations of Waln women left their legacy at Walnford, including Sarah “Sallie” Waln Herrickson. “Sallie” was the first to live her entire life at Walnford and eventually left the property to her long-time African American employee, causing quite the stir in the local community (34-35).

There are more women’s heritage sites to see in central New Jersey! Further your journey by exploring the Women’s Heritage Trail book!