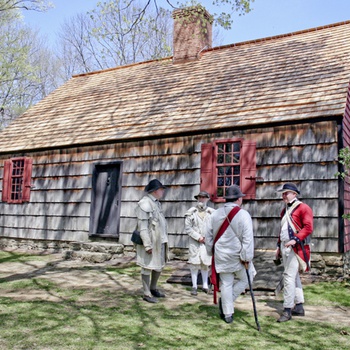 In honor of National Park Week, Jude Pfister, D. Litt., has written a guest post for Journey through Jersey giving a little insight into the formation of our country's first National Historical Park (NHP), which just happens to be located right here in New Jersey! Dr. Pfister is the Chief of Cultural Resources for Morristown NHP and is the author of numerous books on New Jersey and American history.

-HISTORY-
America’s first National Historical Park, Morristown NHP, will officially begin the second century of the National Park Service (NPS) with a bang on April 22, 2017. Founded in 1933 as the first such park in the NPS system, Morristown was created to commemorate the 1779-1780 winter encampment of George Washington and his Continental Army. Founded just 17 years after the NPS itself, Morristown NHP began during the depths of the Great Depression and only a year after the nation recalled the bicentennial of Washington’s birth.

The park, as originally conceived, was to consist of the Jockey Hollow encampment site of the Continental Army. As planning progressed, the Ford mansion, where Washington and his wife Martha spent that hard winter of 1779-1780, was added to the plan. As such, both the comfort enjoyed by the Commander-in-Chief, and the Spartan existence endured by the soldiers, were preserved for future generations.

Many individuals and groups had a part in this preservation initiative which in total covered some 6 years of planning before culminating in 1933 with President Hoover signing the park into existence. His signature simultaneously moved the NPS into the field of historic preservation and today nearly half of the over 400 parks nationwide are based on history. One man, however, stood out as the “Founding Father” of Morristown NHP, and his name was Lloyd W. Smith. Born in 1870 with a distinguished pedigree, Smith amassed a fortune in the banking field and spent much of it securing the legacy of America’s past. Not just the Revolutionary period, but the broad sweep of colonial history stretching back to the period of contact in 1492.

Smith had been collecting long before becoming involved in the Morristown NHP initiative. By 1930, his collection was quite extensive and he was a known personality within the collecting community. For all his expanded approach to the historical narrative, Smith focused his energies for his first major public donation on the Jockey Hollow story. His efforts proved successful in 1933 with the establishment of the Morristown NHP. Twenty years later, he bequeathed his extensive archival and rare book collection to the Morristown NHP where it has been curated ever since.

-TODAY-
In 2016, the National Park Service celebrated its Centennial. For 12 months, parks across the nation honored this milestone with special programs highlighting not just the NPS or a particular park, but the idea and meaning of the mission of the NPS and the people who work and visit the parks. It was a grand time. Now, in 2017, the NPS must look to the future. The next 100 years will play out in ways we can only imagine. Yet, we strive to make the parks welcoming, fresh, challenging, and rewarding. With the assistance of the visiting public, the scholarship of researchers, and the relentless march of time, the NPS will no doubt find much to celebrate for its Bicentennial in 2116.

For now though, during this National Park Week 2017, we pause from imagining the future to focus on the present. There are a number of events and activities occurring this week. Among them will be the annual Encampment Weekend at Jockey Hollow. This event, April 22 & 23, will look at the common soldier and the trials and tribulations of serving in the military during the eighteenth century in the American Revolution. This event features the ever popular musket firing demonstration along with eighteenth century crafts and living history. All events take place at the Jockey Hollow area of the park.

Another major event, occurring on Sunday, April 23, will be a one-act, semi-staged oratorio titled Mark Twain and the General. This will occur at 2:00 PM in the auditorium of the museum building at 30 Washington Place. This is an original composition by Baroque Orchestra of New Jersey music director Dr. Robert Butts. For the performance, an annotated manuscript by Mark Twain will be exhibited from the park’s archival collection. (The general in question with Mark Twain is Ulysses Grant, not George Washington.)

All events are free and more information is available at www.nps.gov/morr or at www.morristownnhpmuseum.blogspot.com. Alternately, for questions concerning the Encampment Weekend please call 973-539-2016 x210; and for questions concerning the Oratorio Concert please call 973-539-2016 x204. Morristown itself has many fine hotels, restaurants, and historic sites. Information on these can be found at the Morris County Tourism Bureau: www.morristourism.org.